When you look at the audience at a Pearl Jam show, you’ll find that most fans are somewhere between the age of 40 to 50 years old with a small majority of men. There is nothing surprising in this fact (or rather than fact, it’s my personal experience) considering the genre of music that Pearl Jam plays and the time they had their big break through in the nineties. Most of us were teens during those years, the band was pretty hard to avoid back then, and research shows that people form their musical identity in their early teens or a little earlier. So when I see a new young(er) face in the fan community, it always catches my eye and sparks my curioisity. How do people discover Pearl Jam these days when there’s no music on MTV and the media in general is dominated by crappy meaningless pop?

29-year-old Sofie Thybo Pedersen showed up at a Pearl Jam Nordic gathering at a bar in central Copenhagen in January. She showed up alone and knew nobody there but felt like a part of the Jamily right away, and that’s what’s so cool about the Jamily: You’re never a stranger. You’re a part of the tribe. The day after the meeting I contacted Sofie to ask if she wanted to do an interview for the blog, so I could ask her more about her story of becoming a Pearl Jam fan and share it with the world.

END_OF_DOCUMENT_TOKEN_TO_BE_REPLACED

Finally , the rumoured European tour has been officially announced. Pearl Jam sent out a newsletter this morning with the final tour dates – many of which correspond pretty well with the rumoured tour dates that have been circulating for quite some time already and that we posted previously.

END_OF_DOCUMENT_TOKEN_TO_BE_REPLACED

With the recent announcements of solo shows in London and Italy, rumours have started spreading like wild fire about a full European solo tour this summer. We hope that the solo shows mean that Pearl Jam are planning to wrap up the recording of a new album soon. Otherwise, Eddie get your ass back in the studio!

END_OF_DOCUMENT_TOKEN_TO_BE_REPLACED

Today, Pearl Jam released the news that the Christmas singles / Holiday singles/ Annual singles / Fan Club singles are going to be discontinued from 2019.

The annual single, which has been released to fan club members every year (except 1994) since 1991, and has since been a cherished collectible to many fans, is no more. In the beginning, the single was sent to all Ten Club members. However, somewhere along the way, a cheaper digital membership was introduced. Digital members would receive the single in MP3 format and the Deep Magazine in PDF, whereas the Analog members would continue to receive hard copies of both.

The band wrote today in a newsletter sent to their fans, that there will be no more Holiday singles from 2019. Fans who were members in 2017 and/or 2018 will receive their singles from those years as production is finalized.

END_OF_DOCUMENT_TOKEN_TO_BE_REPLACED

Ever since the beginning of the Internet, rumours about Pearl Jam tours have been circulating on fora and social media. They usually start around the time of the last show of a tour. Pearl Jam fans just seem to never get enough and are always looking for and dreaming about the next live performance fix.

Surprisingly, to me at least, more often than not these rumours turn out to be true. Numerous times we have witnessed entire tour schedules being leaked with cities and dates, months before the official announcement from the band. END_OF_DOCUMENT_TOKEN_TO_BE_REPLACED

This is the first interview in what we’re planning to be a small series of stories about Nordic Pearl Jam fans that we have gotten to know through the Pearl Jam Nordic community over the last couple of years.

The first time I met Jane was at a get-together at a bar the day before the Eddie Vedder show in Denmark in 2017. Pearl Jam Nordic had arranged a small informal pre-party, the first of its kind in the PJN history, and Jane and her friend Majbritt showed up. They had just arrived on the bus from Berlin, where they had seen Eddie the night before, and apologized for looking tired and make-up-less. No need to apologize, we’ve all been there, haven’t we? And the glow from the happiness of seeing Ed outshines any fancy make-up anytime.

I knew about Jane’s existence even before this evening, as she is quite active on social media and also plays a part in the book ‘Pearl Jam: The More You Need – The Less You Get’ by Henrik Tuxen. More on that later.

Our paths have crossed several times since the first time we met. The Danish Pearl Jam world is small. We drove to Malmö, Sweden together to watch Let’s Play Two last fall because it premiered in Sweden before Denmark. We met up again for the Let’s Play Two event by Sonos in Copenhagen, where Jane was my +1, and we even won a Danny Clinch photo competition together based on a photo from our Swedish adventure. The price was a print of the legendary photo of Eddie’s jump at Wrigley Field the year before. We also met at the Pearl Jam show in Berlin earlier this year – even quite literally bumped into each other on the ferry to Germany as we happened to be travelling on the same bus. END_OF_DOCUMENT_TOKEN_TO_BE_REPLACED

Stay tuned on our Facebook page for updates on the official launch of this page. We can’t wait to meet you here!

Love from your PJN admin crew, 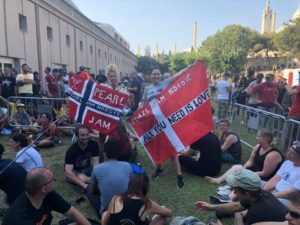